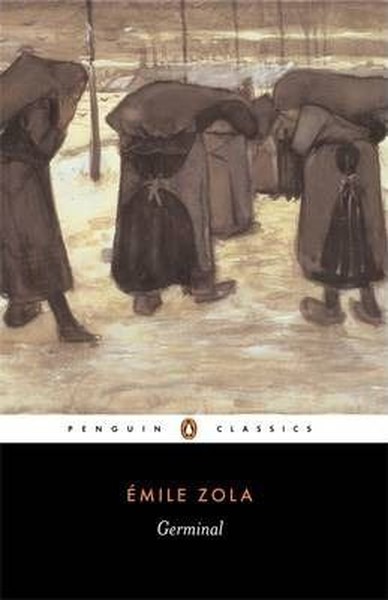 Considered by Andre Gide to be one of the ten greatest novels in the French language, Emile Zola's Germinal is a brutal depiction of the poverty and wretchedness of a mining community in northern France, translated with an introduction by Roger Pearson in Penguin Classics. Etienne Lantier, an unemployed railway worker, is a clever but uneducated young man with a dangerous temper.

Compelled to take a back-breakin job at Le Voreux mine when he cannot get other work, he discovers that his fellow miners are ill, hungry and in debt, unable to feed and clothe their families. When conditions in the mining community deteriorate even further, Lantier finds himself leading a strike that could mean starvation or salvation for all.

The thirteenth novel in Zola's great Rougon-Macquart sequence, Germinal expresses outrage at the exploitation of the many by the few, but also shows humanity's capacity for compassion and hope. Roger Pearson's lively and modern new translation is accompanied by an introduction that examines the social and political background to Zola's masterpiece, in particular the changing relationship between labour and capital.

This edition also contains a further reading list and filmography, chronology, notes and glossary. Emile Zola (1840-1902) was the leading figure in the French school of naturalistic fiction. His principal work, Les Rougon-Macquart, is a panorama of mid-19th century French life, in a cycle of 20 novels which Zola wrote over a period of 22 years, including Au Bonheur des Dames (1883), The Beast Within (1890), Nana (1880), and The Drinking Den (1877).