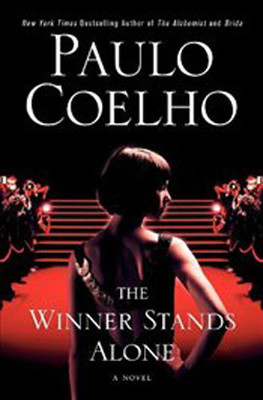 
From The Washington Post's Book World/washingtonpost.com Reviewed by Carolyn See I used to know a guy who hated daylight saving time. Every time it rolled around, he devoted a week to denouncing it, along with corporate greed, artificially fertilized lawns, the American highway system and white bread. When his wife bought a loaf to make the kids' lunches, he hung it out the kitchen window with a rope. He wouldn't have it under his roof. I agreed with him on principle. There are plenty of things to dislike about our culture. His best friend hated standard time, for instance. It ate up the hours of honest working men; it was part of a system to line the pockets of electricity executives; it was -- like American cars and processed frozen food -- a blight on good people everywhere, etc. These guys would have loved Paulo Coelho, although they might wonder about a novelist who deplores glitz and glamour even as he devotes more than 300 pages to evoking glitz and glamour in all its distasteful excess. Coelho takes for his subject here the Cannes Film Festival, which, in his opinion, stands on very shaky moral ground. "In Cannes," an assistant remarks, "there's no such thing as friends, only self-interest. There are no human beings, just crazy machines who mow down everything in their path in order to get where they want or else end up plowing into a lamppost." Coelho disapproves mightily of the human folly on display in Cannes: the unbridled ambition, the thirst for fame, the lure of haute couture and ostentatious jewelry. He hates dark glasses, because "in a celebrity town like Cannes, [they] are synonymous with status," and he loathes cellphones, which are "leading the world into a state of utter madness." He posits a small group of people whom he dubs the "superclass," who have all the power, all the limos, all the private jets; those who dress in high fashion (the fashion world is one of his principal bugaboos), swill champagne, drive Maybachs (the finest car) and who, if they're women, get regular injections of Botox. But he isn't fond of ordinary people either, who do silly things like wear neckties or eat three meals a day whether they're hungry or not. In short, while he compares Cannes to Sodom and Gomorrah, he's not prepared to let sinners of any social class off the hook, quoting Solomon's "Vanity of vanities, all is vanity" more than once and apparently meaning it. So. Igor, a psychotic Russian phone executive with his own private jet, comes to the film festival in pursuit of his ex-wife, Ewa, who has run off with Hamid, an Arab clothes designer also with his own private jet. Igor aims to kill a few people and notify Ewa on her cellphone, hoping this will motivate her to return to him. Over a period of about 24 hours, he does indeed manage to suffocate a young street vendor using the Russian martial art Sambo and off an important movie distributor using a needle soaked in curare, which Igor blows through a cocktail straw -- this at a crowded lunch party on the beach. He spends the afternoon stabbing an independent film director and leaving a hermetically sealed envelope filled with hydrogen cyanide under an unknown person's door. Several unsuspecting women move through this corrupt and glittering landscape: a 25-year-old model who yearns for a chance at the big time, a 19-year-old model from Africa and that murdered director who has spent her entire adult life making a film for which she seeks distribution. Through them, the author visits the worlds of moviemaking. (Will it surprise many readers to learn that the writer is the least well-paid participant in any project?) And we are told that Los Angeles is "really a large suburb in search of a city." The world of fashion is also held up to scrutiny -- its sins too numerous to mention. Yes, we do live in a sinful world where all is vanity. I'd be a fool to disagree; it would be like coming out in support of processed cheese or puppy mills. But note that at the Cannes Film Festival in 2008 Harvey Weinstein bought the rights to Coelho's best-selling "The Alchemist" and will be producing it with a budget of $60 million. I imagine that Coelho was around there somewhere in that modern Sodom, probably wearing dark glasses because it gets pretty bright at the beach, and maybe even talking into a cellphone. It's the human condition, after all -- all that vanity -- and if you can refrain from blowing curare-soaked needles into the backs of people's necks, it isn't all that bad.