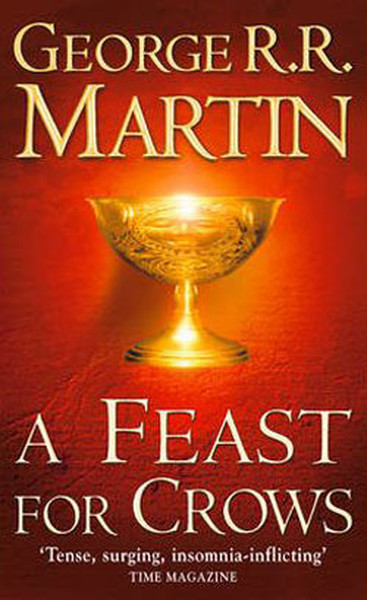 The fourth volume in the hugely popular and highly acclaimed epic fantasy. There is passion here, and misery and charm, grandeur and squalor, tragedy, nobility and courage. Bloodthirsty, treacherous and cunning, the Lannisters are in power on the Iron Throne in the name of the boy-king Tommen. But fear and deceit are in the air: their enemies are poised to strike. The Martells of Dorne seek vengeance for their dead, and the heir of King Balon of the Iron Isles, Euron Crow's Eye, is as black a pirate as ever raised a sail. Across the war-torn landscape of the Seven Kingdoms, Brienne the Beauty (thus named in mockery of her great size and strength) seeks for Sansa Stark, having vowed to protect Sansa from the wrath of Queen Cersei, Tommen's power-hungry mother. Meanwhile apprentice Maester Samwell Tarly brings a mysterious babe in arms south to the Citadel from the cruel frozen north where the sinister Others threaten the Wall! 'A Feast for Crows' brings to life dark magic, complex political intrigue and horrific bloodshed. Against a backdrop of incest and fratricide, alchemy and murder, victory may go to the men and women possessed of the coldest steel!and the coldest hearts.