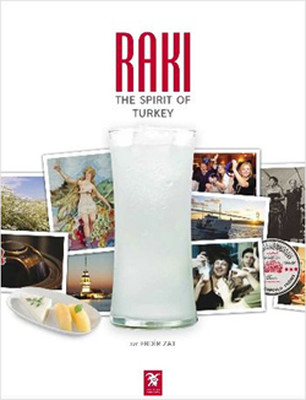 Rakı: The Spirit of Turkey

At the mention of Turkey, many things come to mind. The meeting of Europe and Asia, and of the cold north winds with the warm breezes of the Mediterra-nean; a vast, rugged landscape. To be in this country is to look at the world from the center of world history; a place where cultures, languages and faiths blend, and nothing remains the same for long.

Rakı is the traditional drink of this country, and as such, reflects the fundamental aspects of its personality. Though it's as clear as water, it turns white when water is added, and with a little ice, it envelops you in the heady scent of anise. What better evidence that nothing in this country is as it appears? And in the bottle rakı may appear rather innocuous but once you drink it...!

Made from distilled grapes and anise, rakı, with its nearly 500 years of history, is the central element in a unique cuisine that has grown up around it. When introduced to a conversation between a group of friends, it deepens the sincerity and friendship, making it as indispensable a lubricant for everyday life today as it has been throughout its history. It is a firsthand witness to all the major turning points of Turkish history. And finally, when trying to understand almost any aspect of Turkey, rakı assumes the role of interpreter, allowing you to understand the subtleties of this country's spirit.

Author Erdir Zat edited the "Encyclopedia of Rakı" (in Turkish), published by Overteam Publishing, won first prize in the spirits division of the 17th Interna-tional Gourmet Book Awards. Now, in order to open up the conversation be-tween rakı and the world, Zat has written the first book in English book on drink. Titled "Rakı: The Spirit of Turkey," the book was written as a guide for the English-speaking public, not merely to rakı, but to everyday life and culture in Turkey.

The first book in English on the subject, Rakı: The Spirit of Turkey consists of five chapters. The first, "Rakı Culture," sums up the importance of rakı in Tur-key's social and cultural life. The second chapter, "The Origins of Rakı," focuses on what we know of the drink from historic records. "The Meyhane" outlines the characteristic features of the "tavern" tradition, as well as historic laws that governed them and how they affected everyday life. "The Çilingir Sofrası" delves into the world of mezes, the mainstay of a unique cuisine that has taken shape around the hub of rakı. The last chapter, "Rakı as a Spirit," examines the subtleties of production and presentation that sets rakı apart from its peers, as well as rakı's commercial history.

Written with the consultancy of Murat Belge, Raşit Çavaş, Bahattin Yücel and Vefa Zat, the book also includes a foreword by Murat Belge. Published by Overteam Press with the support of Yeni Rakı, "Rakı: The Spirit of Turkey" was translated into English by Bob Beer.

Rakı: The Spirit of Turkey