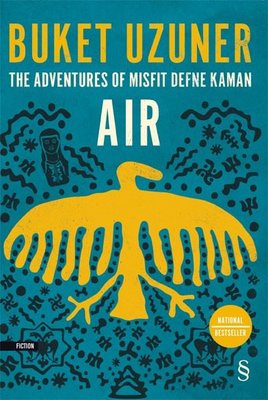 The journalist Defne Kaman is being prosecuted for her article Why Not Nuclear Energy? In Kayseri, where the trial is being held, Defne Kaman is joined by Turkey's renowned environmental lawyers, journalists, animal and environmental rights activists and NGO representatives. The day Defne Kaman arrives in Kayseri a bust mysteriously disappears from the city center. It is the bust of Gevher Nesibe, a female Seljuk sultan who, in 13th Century Kayseri, built one of the world's first medical schools, as well as a hospital that treated patients with music. Following a surprise development on the morning of the trial Defne Kaman also vanishes. Her friends then head to Cappadocia, on a tip that the journalist has been spotted on a hot air balloon there.

Buket Uzuner's character, Defne Kaman, the female journalist who defends the position that the natural disasters caused by climate change can be prevented through sustainable clean energy and who is a supporter of animal, children's, women's and environmental rights, leaves a mark on literature. The author invites the reader to remember the essence of our thousands of years old ancient Shamanic tradition which regards humans as equal to all other living beings in nature. Buket Uzuner's Air is a striking climate-fiction novel that brings back respiration to our biotically off kilter planet. Serpil Opperman President, EASLCE (European Association for the Study of Literature, Culture and Environment) Like an eco-shaman, in her Nature Quartet novels, Buket Uzuner embarks on a journey to reconcile our daily existence with our perception of the world around us, making use of Anatolian culture, mythology and history in the process. Pinar Batur, Vassar College, USA
Ufuk Ozdag, Hacettepe University