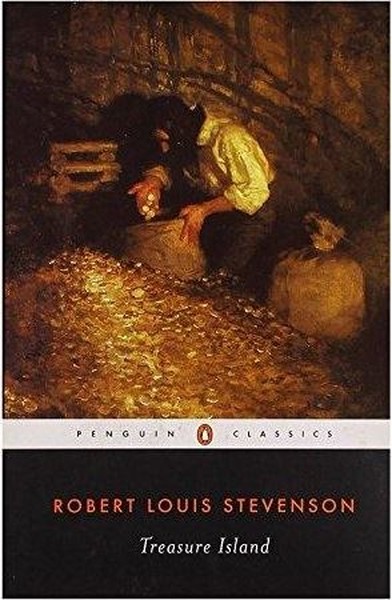 The quintessential adventure story that first established pirates in the popular imagination, Robert Louis Stevenson's Treasure Island is edited with an introduction by John Seelye in Penguin Classics.

When a mysterious sailor dies in sinister circumstances at the Admiral Benbow inn, young Jim Hawkins stumbles across a treasure map among the dead man's possessions. But Jim soon becomes only too aware that he is not the only one who knows of the map's existence, and his bravery and cunning are tested to the full when, with his friends Squire Trelawney and Dr Livesey, he sets sail in the Hispaniola to track down the treasure.

With its swift-moving plot and memorably drawn characters - Blind Pew and Black Dog, the castaway Ben Gunn and the charming but dangerous Long John Silver - Stevenson's tale of pirates, treachery and heroism was an immediate success when it was first published in 1883 and has retained its place as one of the greatest of all adventure stories.

In his introduction John Seelye examines Stevenson's life and influences and the novel's place within adventure fiction.

This edition also includes Stevenson's essay on the composition of Treasure Island.

Robert Louis Stevenson (1850-1894) was born in Edinburgh, the son of a prosperous civil engineer. Although he began his career as an essayist and travel writer, the success of Treasure Island (1883) and Kidnapped (1886) established his reputation as a writer of tales of action and adventure. Stevenson's Calvinist upbringing lent him a preoccupation with predestination and a fascination with the presence of evil, themes he explored in The Strange Case of Dr Jekyll and Mr Hyde (1886), and The Master of Ballantrae (1893).