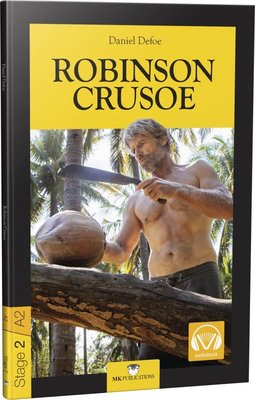 Young Robinson Crusoe, obsessed with the idea of sea and adventures, leaves his home against the will of his parents. He goes on board a ship to see the world and experience many new things. He tempts his fate all the time. After a series of fatal adventures, he comes on board a ship bound to the coast of Africa. By an unhappy chance, Robinson and other seamen get caught in a terrible storm which seems never to end. In this storm, nobody survives but Robinson Crusoe. He finds himself on a desert island which is located far away from shipping routes. However, he tries to make the best of it. He builds a comfortable habitation, learns how to provide himself with food, and discovers the whole island. He rethinks his life and its values completely.

Robinson lives alone on the island for nearly three decades. But one day his calm life turns upside down when he sees a man’s footprint on the sand. Shortly, he discovers cannibal barbarians who come to the island to perform their horrible rituals. He saves one of their victims by chance, whom he names Friday in the remembrance of the day he saved him. They live happily on the island, but the danger from the savages never leaves them in safety. One day, the possibility of escape from the island becomes real for Robinson. He acts in cold blood, showing great courage and insight. But only chance decides whether he should return to England or live his whole life on the island…