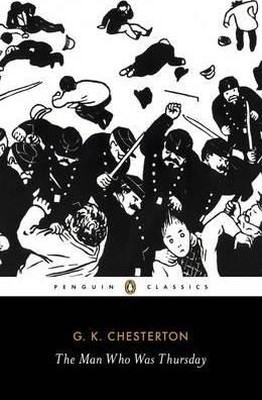 The Man Who Was Thursday

The Man Who Was Thursday Kitap Açıklaması

G.K. Chesterton's The Man Who Was Thursday is a thrilling novel of deception, subterfuge, double-crossing and secret identities, and this Penguin Classics edition is edited with an introduction by Matthew Beaumont.

The Central Anarchist Council is a secret society sworn to destroy the world. The council is governed by seven men, who hide their identities behind the names of the days of the week. Yet one of their number - Thursday - is not the revolutionary he claims to be, but a Scotland Yard detective named Gabriel Syme, sworn to infiltrate the organisation and bring the architects of chaos to justice.

But when he discovers another undercover policeman on the Council, Syme begins to question his role in their operations. And as a desperate chase across Europe begins, his confusion grows, as well as his confidence in his ability to outwit his enemies, unravelling the mysteries of human behaviour and belief in a thrilling contest of wits.

But he has still to face the greatest terror that the Council has: a man named Sunday, whose true nature is worse than Syme could ever have imagined ...In his introduction, Matthew Beaumont examines the book's themes of identity and confrontation, and explores its intriguing title.

This edition also contains a chronology, notes and suggested further reading. G.K. Chesterton (1874-1938) attended the Slade School of Art, where he appears to have suffered a nervous breakdown, before turning his hand to journalism.

A prolific writer throughout his life, his best-known books include The Napoleon of Notting Hill (1904), The Man Who Knew Too Much (1922) and the Father Brown stories. Chesterton converted to Roman Catholicism in 1922 and died in 1938.

The Man Who Was Thursday