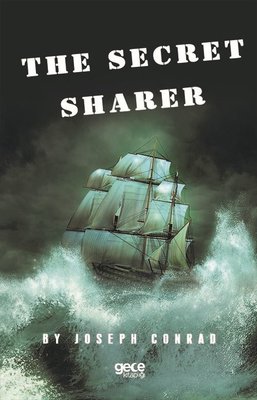 On my right hand there were lines of fishing stakes resembling a mysterious system of half-submerged bamboo fences, incomprehensible in its division of the domain of tropical fishes, and crazy of aspect as if abandoned forever by some nomad tribe of fishermen now gone to the other end of the ocean; for there was no sign of human habitation as far as the eye could reach. To the left a group of barren islets, suggesting ruins of stone walls, towers, and blockhouses, had its foundations set in a blue sea that itself looked solid, so still and stable did it lie below my feet; even the track of light from the westering sun shone smoothly, without that animated glitter which tells of an imperceptible ripple. And when I turned my head to take a parting glance at the tug which had just left us anchored outside the bar, I saw the straight line of the flat shore joined to the stable sea, edge to edge, with a perfect and unmarked closeness, in one leveled floor half brown, half blue under the enormous dome of the sky. Corresponding in their insignificance to the islets of the sea, two small clumps of trees, one on each side of the only fault in the impeccable joint, marked the mouth of the river Meinam we had just left on the first preparatory stage of our homeward journey; and, far back on the inland level, a larger and loftier mass, the grove surrounding the great Paknam pagoda, was the only thing on which the eye could rest from the vain task of exploring the monotonous sweep of the horizon. Here and there gleams as of a few scattered pieces of silver marked the windings of the great river; and on the nearest of them, just within the bar, the tug steaming right into the land became lost to my sight, hull and funnel and masts, as though the impassive earth had swallowed her up without an effort, without a tremor. My eye followed the light cloud of her smoke, now here, now there, above the plain, according to the devious curves of the stream, but always fainter and farther away, till I lost it at last behind the miter-shaped hill of the great pagoda. And then I was left alone with my ship, anchored at the head of the Gulf of Siam.